What is Real Time marketing?

Real time marketing is a new concept driven mainly by the expansion of social media and the opportunity to interact with consumers individually real time. While the concept is self explanatory, it is not clear how to do it. Here is a great story to learn about real time marketing and activate it for your brand.

On March 31st, 2008, Canadian folk musician Dave Carroll was on a United 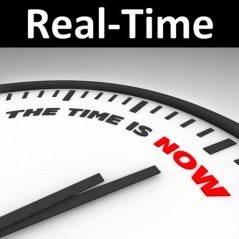 Airlines (UA) plane waiting to take off, when he got startled because of another passenger sitting few rows behind him: “Oh my god, they are throwing guitars”. He immediately knew it belonged to him and looked through the window only to confirm this fact. It was true. Ground crew was throwing expensive guitars to place them in the plane. He immediately complained to the plane crew, yet they directed him to the ground crew who directed him to the final destination ground crew as it was a connected flight. When he finally received his Taylor brand guitar, it was damaged. After 9 months of emails and phone calls to claim 1200 dollar worth of repair bill, he received a final “No” answer from UA. While most people give up at this stage, he decided to change his course of action which also changed the course of the airline industry. He decided to bring the fight to home turf and wrote a song called “United breaks guitars” and placed the video on Youtube. The video got huge public attention and was all over the news in more than 50 channels including CBS, CNN and Fox. While David was giving tens of interviews, UA share prices dropped.

The story was not over. Grabbing the opportunity, the owner of Taylor Guitars, Bob Taylor posted a video response to Dave Carroll and directed them to their website to learm their rights about carrying valuable goods while promoting Taylor guitars which led to sales increase nationwide. Likewise, travel-proof guitar pack producer Jim Laffoley launched the series called Dave Carroll in 1 week and boosted their sales. Waking up from the nightmare, UA representatives invited Dave Carroll to airport and apologized officially. The American Senate listened to Dave on Sep 22, 2009 and revised the airline regulations. Dave got nationwide popularity, wrote a book telling his story (United Breaks Guitars) and enjoyed his new career both as a musician and key note speaker.

While the story is entertaining, it outlines a big threat or an opportunity for today’s brands. Despite this happened 5 years ago, most brands still do not have the right infrastructure to deal with such real time crisis. The bigger the brand, the more vulnerable it is.

So, are you ready to interact real time with your consumers who are equipped with social media? Does your brand have the right real time marketing infrastructure? Have you decided who can speak on behalf of your brand at a moment’s notice? The answer is negative for most brands. Because they change more slowly than consumers. Here are some tips to get up and running with real time marketing:

Listen to you consumers real time: Like it or not, your consumers are already talking about you. It is better to be part of this conversation, instead of ignoring it. Given that most of the social sharing is happening on Facebook, Youtube, Twitter and blogs, you need to be present in these platforms with your brand name and start talking to your consumers directly by listening to them. The technology to monitor these conversations are getting more sophisticated everyday (brandwatch.com).

Interact with your consumers in the same medium: The days of one sided communication where you can create a perfect picture of your brand is over. If you want to communicate with consumers, you have to break the walls between you and them. You have to be accessible. For example, if a UA representative posted an apology video right away after Dave’s posting claiming to pay for the repairmen and revisit the internal procedures to avoid future cases, wouldn’t it be even positive for UA’s image? A giant company, being humble about its mistake against a single customer. How can you be mad at them? It would slow down the viral impact and gain more public sympathy.

Create a real time marketing team: Despite multi-million dollar marketing budgets, UA failed in comparison to small entrepreneurs such as Taylor Guitars when it comes to real time marketing. I presume the main reason is the lack of infrastructure to handle social media and decision making for communicating individually. Of course, we should not underestimate the fear of losing control of communication when one attempts to talk to many individually. Yet, this is not really that scary, instead it makes the brand more human. Brands need real ambassadors who understand the brand values and represent them in one-to-one conversations with consumers. Secondly, these ambassadors have to be linked with a small group of authorized decision makers who can talk for the brand. For example. Obama Campaign Manager David Plouffe created a small but agile communication team in the center who had the responsibility to answer questions coming from all over the country. This allowed him to create a locally tailored but centrally consistent messaging delivered fast to the audience. It gave a clear message to public. We are here, we listen and we act. Likewise, Dave Carroll had to enroll his relatives to manage the high traffic due to his sudden publicity. In 48 hours, he managed to be on CNN, CBS, FOX and BBC while making phone interviews with local and regional press.

Crowd-source ideas: This concept could be a great and efficient solution to particularly small brands with loyal consumers. Nevertheless, the concept is also utilized by big brands such as Doritos Superbowl Challenge 2011 or Nike Air Force design. The approach is revolutionary to conventional marketing while boosting creativity and driving participation. It particularly provides a short cut to research, strategy, creativity, test approach which is lengthy. Instead. it jumps right to the execution which is proven to be liked by consumers.

Speed over perfection: Social media has changed the news cycle dramatically. In the past, prime time news driven cycle would repeat from 8 pm to 8 pm. Now, the cycle is measured in hours in social media. Dave’s video reached 330 views next day at 8 am, 5000 at 12 pm and 25000 by the afternoon. This enabled the video to be picked up influential consumer sites and news channels. Rest was a self perpetuating viral wave. UA made a big mistake by being oblivious to this wave. To succeed, brands now have to reply in hours to any growing conversation with speedy responses instead of fully polished PR releases. The size of the companies, can not be an excuse for slow response. Companies such as Coca Cola, already well placed their social media oriented executives in key positions. Moreover, the news doesn’t have to be negative all the time. Sometimes, it’s the opposite. For example, on Feb 28th 2012, the leakage of jet fuel during the Nascar race stopped the action for 2 hours. While the organizers were cleaning up the mess on the road, they used Tide detergent. The presenter, who had nothing to talk during this time, talked about how Tide detergent saved the day. Jumping on this golden opportunity, Procter & Gamble executives bought the footage and developed a new advertising spot with the slogan: “While you invent new stains, we invent ways to get remove them”. Aside from the commercial impact, P&G received 8 million dollar worth of free PR behind the stunt.

We are now living in a world where the consumers are ruling the brands. Brand Managers have a unique role to listen to and understand them better than anybody else. They should pioneer breaking the traditional walls between brands and consumers and facilitate this interaction by taking risks and releasing control. The demise of the brands who are ruled by brand managers that don’t let go are only one Youtube video away.

“For an extended version of the story, you can read “Real Time Marketing and PR” by David Meerman Scott.